Some readers may be interested in my latest slightly dodgy method of getting telescope polar alignment.

I use an old but trusty Celestron CG5 Equatorial telescope mount with two motors.  The built in polar scope is useless – too small with no illumination.  The following method could be adapted for other similar mounts.

I have made an adapter which fits into the mount polar axis casting, and holds a 10mw green laser pointer in the centre and parallel to the axis.   All castings are tapered to allow extraction from the mould and this one is no different, so the adapter was turned to fit the tapered hole.  A close fit hole was drilled into the adapter for the laser pointer, which happened to be a parallel sided straight tube.  An air release hole was drilled sideways through the adapter, to let the air out and in when the laser is fitted in or removed.

Here’s how it works : 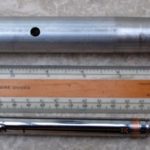 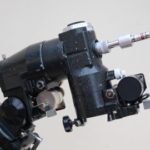 In conclusion I have found that this method is very good for visual observing as I get very good tracking.  I don’t do astrophotography, so I am not sure if it would be good for this.

The only dodgy part is my laser, which is a Class 3 X 10mw.  I have used it for years at star parties but am always very careful.  Just don’t let it get into your eyes !

“EYE INJURY HAZARD — DIRECT AND REFLECTED BEAM
Class 3B visible-light lasers are hazardous for eye exposure. They can cause burns to the retina. A person cannot turn away or blink fast enough to prevent retinal eye injury from a nearby Class 3B laser.

At the low end, around 5 to 50 milliwatts, a Class 3B laser poses a moderate risk of eye injury. It is unlikely that a handheld beam aimed from more than a few dozen feet away would cause injury — laser light could not stay on one spot on the retina long enough for heat to build up to injurious levels. However, the risk is increased if the beam is held steady or if the laser is relatively close to the eye.”

Caveat: Lasers can be seen at night because the beam lights up moisture and dust in the air, during really dry clear air conditions the beam may not be visible.